The Best of Our Knowledge

Survival of the fittest.  British philosopher Herbert Spencer coined that phrase back in the 18 hundreds and its been used as an interchangeable description of Darwin’s term “natural selection”.  But there are new theories that say life flourished on earth by cooperating...not competing. Today on The Best Of Our Knowledge, our Origins of Life series takes a look at survival of the most cooperative.

The Best of Our Knowledge 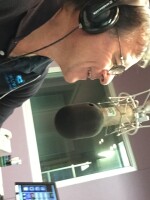 Bob Barrett
Bob has been a part of the WAMC family since 2001. He currently produces and hosts National Production's The Best Of Our Knowledge. Over the years, Bob has produced The Environment Show and The Health Show for National Productions and hosted weekend mornings on WAMC for a decade. In addition to producing TBOOK, he is currently a reporter and on air host at WUWF Public Radio at the University of West Florida in Pensacola.
See stories by Bob Barrett
What's coming up next week on WAMC?
Sign up below to find out about upcoming programs first.
get updated