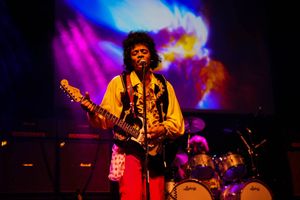 Rolling Stone Magazine Says: "Yes believe the hype! This show lives up to it!" After a headlining, show stopping performance at The Hudson Valley Expo in summer of 2019, Kiss The Sky returns to Peekskill, NY to celebrate Black History Month. The show recreates the most iconic concerts of Jimi Hendrix’s career including a 50th anniversary nod to his Band of Gypsys. KISS THE SKY is the #1 Jimi Hendrix Tribute Show in the world garnering rave reviews and playing to sold out festivals and venues across the USA, Kiss The Sky's show features meticulously replicated wardrobe, gear, set lists and a Joshua Light show originally used at the famed Fillmore East. Playing the part of Jimi Hendrix is left handed guitar virtuoso and long running Hendrix tribute artist Jimy Bleu. Bleu executes all of Hendrix’s legendary stage moves and guitar licks so expertly that he has toured Billy Cox, bass player with Hendrix’s own Band of Gypsys. Kiss The Sky has also had the honor of having Cox and other remaining members of Hendrix’s bands join them on stage. RAVE REVIEWS! Billy Cox, Hendrix Bassist and band mate with Band Of Gypsys: "Jimy Bleu is the real deal. A Jimi Hendrix aficionado" Juma Sultan, Hendrix Percussionist - 1969 Woodstock band - the Gypsy Sun and Rainbows "When it comes to performing Jimi's music, I don't impress easily and there is no question that KTS is the most detailed and historically accurate Jimi tribute show I've seen. Jimy Bleu truly brings the Hendrix spirit to the stage. And that is no small task. They have my full endorsement." Katie Daryl, Host and producer of AXS-TV show The World’s Greatest Tribute Bands: “Kiss The Sky is spectacular! So often with tribute bands people say close your eyes, they sound just like them, but with Kiss The Sky you MUST keep your eyes open because the guitar playing, vintage gear, costumes and stage presence of the band is so very precise and out of this world your jaw will drop!”