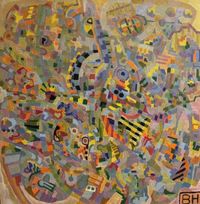 Michael Tillyer and the Anchor House of Artists: celebrating art on the human scale Anchor House of Artists began in 1997 when sculptor Michael Tillyer opened his small studio to artists he had come to know who happened to be living with mental illnesses. His goal was to give an opportunity for these people to redefine themselves as who they truly were: creative artists. Michael’s efforts were twofold: to fight the stigma these artists faced, as well as to bring a new voice in visual art to Western Massachusetts and beyond. Since that time, the project has expanded to a 4000 square-foot space. While the studio is still the heart of Anchor House, now there is also space for a workshop, four galleries and an experimental performance arena. All is available to artists served by the mission and to visiting professionals to launch new work in vibrant, authentic self-produced exhibits and performances. In January 2017 a new venture emerged: the New England Visonary Artists Museum. Michael had been working with the Anchor House Artists for 22 years at this point, and some of his beloved artists had passed. Within the confines of the Visionary Artists Museum their artwork could be conserved, exhibited and continue to educate the public. It is the life of the artist that matters in the end. Exhibit runs through the end of the year, reception on December 7, from 3-5pm with music by Loren Feinstein. For more information, SalmonFallsGallery.com or call the gallery at 413.625.9833. Information on the Anchor House of Artists: anchorhouseartist.org; New England Visionary Artists Museum: neva-museum.org Participating Anchor House Artists: Jon Stark Mary Dunn Genevieve Burnett Ben Hotchkiss Kevin Bouricius James Brown Molly Rupp Mary Dunn Peter Mishkin